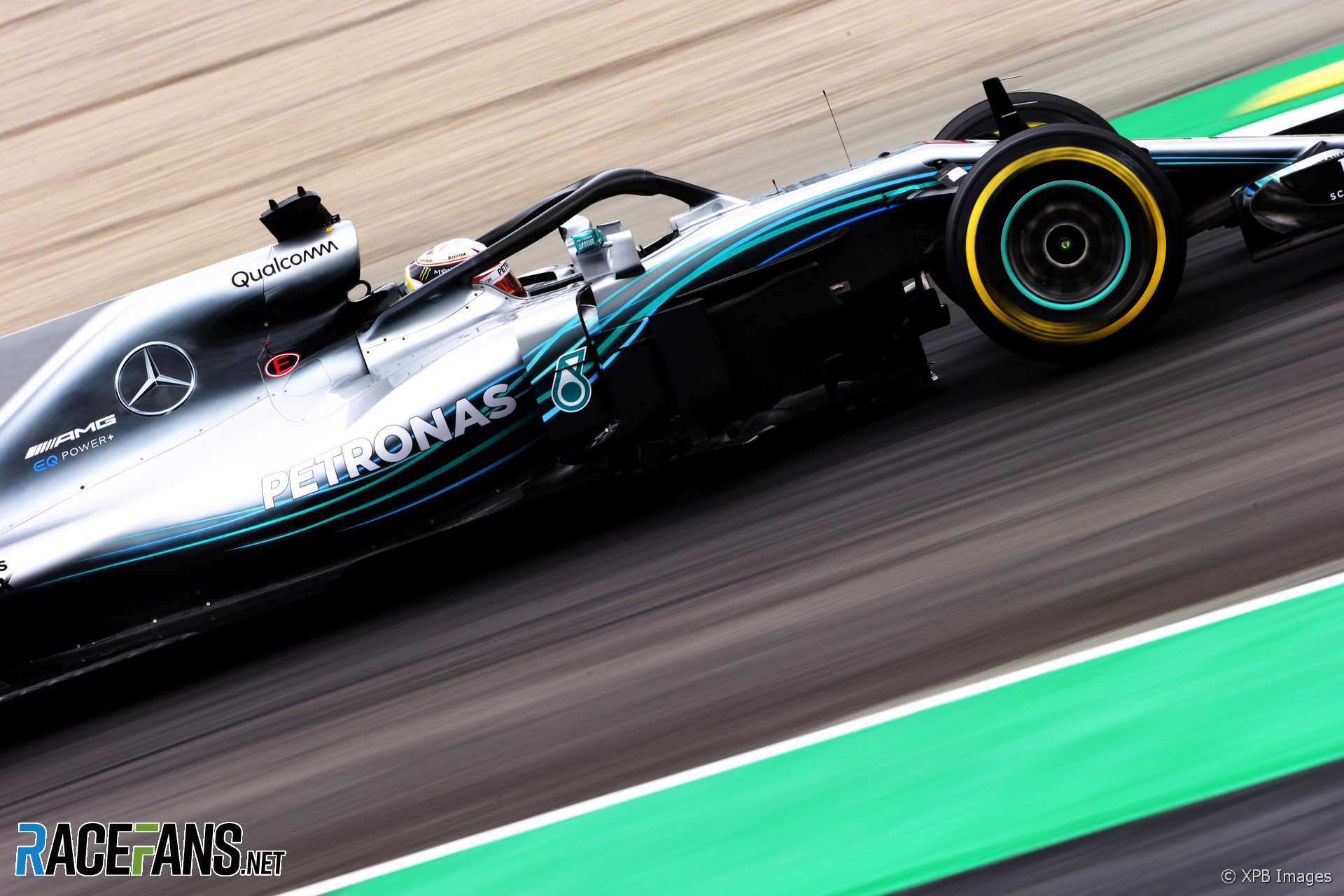 Lewis Hamilton took pole position for the Spanish Grand Prix ahead of Mercedes team mate Valtteri Bottas with the Ferraris of Sebastian Vettel and Kimi Raikkonen behind.

Mercedes locked out the front row ahead of their Ferrari rivals, who were unable to use their harder compound Soft tyres to take pole position.

Red Bull will line up on the third row, with Max Verstappen in fifth and Daniel Ricciardo sixth.

As the first qualifying session began around a blustery Barcelona circuit, Brendon Hartley was seen walking around the paddock, confirming that his Toro Rosso would take no part in the session after his heavy practice shunt.

Super Soft tyres were the compound of choice throughout the field, with Sebastian Vettel setting the early pace with the fastest time of the weekend so far on a 1’17.031,

Marcus Ericsson ran wide at Turn One but failed to keep to the left of the bollard at the exit of the escape road, placing him under investigation by the stewards.

Nico Hulkenberg attempted to set his first flying lap in the Renault, but audible power issues sent him straight back to the pits.

Despite getting back out with enough time to set a flying lap, Hulkenberg’s 1’18.923 was not enough to get him through to Q2, leaving him the first man eliminated in 16th.

Marcus Ericsson was unable to advance in the Sauber, while team mate Charles Leclerc comfortably made it through in 12th.

Williams’s woes continued with Sergey Sirotkin and Lance Stroll anchored to the rear of the timesheets. Stroll lost control of his car exiting Turn 12, spinning into the barriers and securing his elimination.

With teams switching to the Soft tyres for Q2, it was Sebastian Vettel who employed them to best effect by breaking into the 1’16s for the first time with a 1’16.802.

Romain Grosjean briefly ran off circuit but was able to resume, making it through to Q3 in eighth.

The battle for the final slot in the top ten shootout was between the two McLaren drivers of Fernando Alonso and Stoffel Vandoorne, with the local hero prevailing as the chequered flag flew.

The final battle for pole was looking like a straight fight between Mercedes and Ferrari as Q3 began.

But it was Red Bull who surprised their rivals by both Max Verstappen and Daniel Ricciardo breaking into the 1’16s for the first time, with only Lewis Hamilton posting a quicker time after the first flying laps.

Both Sebastian Vettel and Kimi Raikkonen had disappointing first attempts, putting the pressure on Ferrari as the final minutes began.

Red Bull opted to send Ricciardo out on the Soft compound tyres, with Ferrari also choosing the harder rubber for both Vettel and Raikkonen.

Ricciardo was unable to improve on his time, while Raikkonen jumped to a provisional second place in the Ferrari.

Mercedes chose to stick with the Super Soft tyres and it proved to be the faster choice, with Hamilton setting a blistering lap of a 1’16.173 to take pole position.

Valtteri Bottas secured a Mercedes front-row lock out by posting a time only 0.040s slower than his team mate.

Sebastian Vettel took third for Ferrari, only a tenth off Mercedes’s ultimate pace on the Soft tyres.

Kimi Raikkonen will line up ahead of the two Red Bulls of Max Verstappen and Daniel Ricciardo. Kevin Magnussen will start seventh, ahead of the two Spaniards of Fernando Alonso and Carlos Sainz Jnr with Romain Grosjean rounding out the top ten for Haas.