Brendon Hartley says the biggest difference between racing in F1 and the World Endurance Championship isn’t the cars themselves but the rubber they race on.

Hartley, who won the World Endurance Championship with Porsche team mates Timo Bernhard and Earl Bamber last year, is three races into his first full F1 season with Toro Rosso. He says the change from WEC’s Michelin tyres to the Pirellis used in F1 has taken some getting used to.

“The biggest difference is still the tyre,” said Hartley. “It’s a completely different beast to get the most out of.

“The modern Formula One engine is amazing,” he said. “There’s very complicated things going on the back of the engine and the whole power unit but from a driver’s point of view it’s very manageable and not much to think about behind the car.”

The deployment of hybrid power is “almost invisible”, Hartley added. “Obviously there’s a few things to manage in the race and behind the scenes but generally speaking there’s not so much to manage for the driver. There’s enough simulation and enough engineers behind all the teams that they get it right from the word go. So quite a different characteristic as well – in LMP1 there’s a lot of energy management per lap where here’s it’s much less.”

Porsche recently demonstrated the potential performance of an LMP1 car when allowed to run outside the series’ tight restrictions. “Top speed in Formula One is a lot higher because we have a lot more fuel per lap,” Hartley said. “In LMP1 we were quite starved, especially at the higher end of the scale.

“Pure acceleration out of the corner was quite similar. [Having] four-wheel-drive and traction control in the LMP1 meant from a low-speed corner there was amazing drive, but a Formula One car keeps accelerating.” 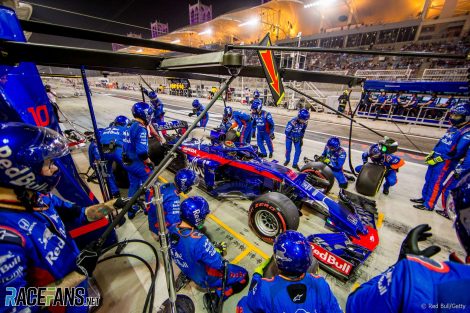 F1’s unusual tyres have taken some getting used toThe top-end performance of an F1 car is where it finds much of its lap time advantage, Hartley said.

“An F1 car also has more downforce in high-speed, which also means better potential on the brakes. A lot of the lap time gain in Formula One is either high-speed [corners] and top speed. You’re braking from a much higher speed in Formula One and the stropping power is very impressive also due to the amount of downforce that we have.”

Toro Rosso team principal Franz Tost has said Hartley’s experience with fuel conservation in WEC is serving him well in F1. Hartley said he’s “used to having to be very efficient because we were so restricted on fuel there.”

“So if we get to a race where we are very restricted on fuel I think it’s a good strength from my side. Obviously working on such a project is all valuable experience, working with Mark [Webber] and Timo and my other team mates, all experience is good experience.”