A familiar face is back in the Circuit de Catalunya paddock this weekend. @DieterRencken takes us behind the scenes at the Spanish Grand Prix.

I wake up and realise I could have slept longer as F1’s revised time schedule means final practice happens an hour later than previously, now starting at midday. Catch up on stuff in hotel as there are fewer distractions. Still astounded that slack security at the circuit resulted in almost 50 cars being vandalised over two days…

Head for circuit, traffic picking up already which suggests improved attendance for Saturday. Improved security in car parks, but still the guards allow public to walk amongst the cars. Any wonder there are security issues?

I decide to skip breakfast as lunch will be crammed between FP3 and Qualifying. A cappuccino at Force India while catching up with Robert Fernley is all I need.

We chew fat about IndyCar versus F1 – Fernley having been an IndyCar owner back in the days of turbo Cosworths – before moving onto the current state of F1. Always interesting insights from Bob. 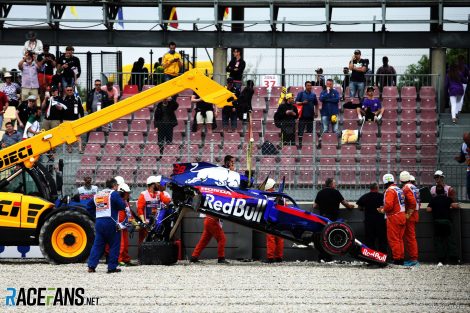 Hartley had a big oneStart of FP3, which ends worryingly after Brendon Hartley misjudges his corner entry by two centimetres and smacks into the wall at massive speed. I can’t help but wonder whether the likeable, lanky Kiwi is out of his depth in F1 given his performance since making his debut in Austin last year. At F1 level there is no room for error or excuses.

Lunch at Mercedes consists of scrumptious Korean chicken salad, followed by apple strudel and fruit salad enjoyed in the company of folk not seen since Abu Dhabi. Given the costs of attending the fly-away rounds, many publications choose to start their “live” seasons in Spain, so this race provides plenty of catching up.

While wandering the paddock, by chance I facilitate a reunion between Felipe Massa and his first F1 team boss Peter Sauber, who took a punt on the Brazilian in 2002. I see Peter, present in Barcelona as ambassador for his former team now owned by investors, walking towards us, point at Felipe and the next thing the two are hugging like father and son and discussing their respective families.

When Peter, always a gentleman regardless of circumstance, asks Felipe, who retired from F1 last year, what he is up to, the quip is priceless: “Like you, I’m a pensioner…”

The end of qualifying and start of the real working day: I choose the Red Bulls, McLaren and Williams sessions for interviews, farming out Toro Rosso’s twins, the Sauber boys and Haas trio to colleague Gabriele Koslowski – and agree swaps for the rest with other members of the media pack. It’s the only way to ensure full coverage with modest crews.

A question common during the McLaren and Williams sessions is whether Eric Boullier and Paddy Lowe are the “right people” to lead their respective teams out of their current malaises. It’s never easy posing such questions to folk one considers to be paddock friends – or watching them squirm – but duty calls. Credit where due: they both answered with aplomb while taking responsibility where necessary.

Finish off the interview stuff and send the files to base, then head for the Paddock Club where Rolex presents journalists with copies of the latest “Who Works in F1” directory – an invaluable resource for the media. A walking buffet is offered, which I decline due to an invite to Mercedes for a panel presentation on “How Formula 1 is accelerating technologies of the future”, followed by a barbecue – taken indoors rather than on the roof terrace because the rain has arrived.

Head for the hotel, and am amazed to note that all the cars still in the media parking lot have leaflets advertising a nearby House of ‘Horizontal Refreshment’ stuck under their wipers. So much for the enhanced security measures promised by the circuit…