Daniel Ricciardo thinks Pirelli should bring its new hyper-soft tyres to every round of the championship to make races more exciting.

Several drivers voiced their unhappiness with the tyres Pirelli provided for last weekend’s Spanish Grand Prix. The softest tyre available, the super-soft compound, was a focus of criticism as it performed poorly and was only used by two drivers in the race.

Ricciardo was one of several drivers who urged Pirelli to create a larger performance gap between the nominated tyres.

“I did my quickest lap [in qualifying] with a soft. I think a lot of the time this year the tyres haven’t really had a big enough difference.”

Only one of the drivers who reached the top 10 in qualifying last weekend did so using the super-soft. Ricciardo pointed out that meant teams at the tail end of the top 10 were at a disadvantage.

“For us quicker cars it makes it a bit easier but if you’re sitting in eighth place they’re likely starting on the worst tyre and they’re already starting at a disadvantage. So that’s what a lot of the midfield teams were complaining about, which makes sense.”

The hyper-soft tyre, which is new for the 2018 F1 season, won immediate praise from drivers when it was used for the first time in testing. It has been nominated by Pirelli for two of the first 10 races.

But Ricciardo, who has chosen the maximum allowance of hyper-softs for next week’s Monaco Grand Prix, wants it to appear more often to create more opportunities for teams to be creative with their race strategies. 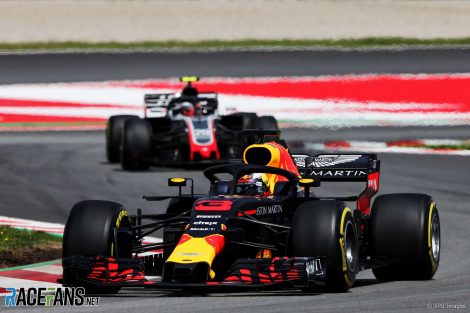 More hyper-softs means more strategic options, says Ricciardo“I don’t know why we can’t have the hyper-soft at every race,” he said. “At least we qualify on it and then maybe figure it out after that. [Then] we’ve got a qualifying tyre and then bigger differences in the race, just create a bit more opportunity.”

Ricciardo said his first impressions of the hyper-soft tyre was positive. “We ran it in Abu Dhabi, it seemed to be a good step up on grip, seemed to hold on.

“And then in winter testing it was the same. So far it seems OK. I don’t know how long it would last on some circuits. But at the moment, whether it’s the construction or whatever, it seems like it’s a decent tyre. We’ll see, we’re using it next week.”

However Pirelli’s sporting director Mario Isola says this week’s test at the Circuit de Catalunya shows the hyper-soft is too soft for that track.

“Clearly on this circuit the hyper-soft is too soft,” he said. “The performance is there for one lap or less than one lap, but [that] is a normal situation for a hyper-soft in Barcelona.

“The level of grip in the hyper-soft is high, it is a step compared to the ultra-soft. Now we are very interested to see what is the result in Monaco because obviously it’s a different circuit, a street circuit with lower severity. The hyper-soft is designed for this kind of track, not Barcelona.”