Lance Stroll’s father Lawrence wants Williams and Mercedes to adopt a Haas/Ferrari-style model but denied he has offered to pay for it.

Haas sources its power unit, gearbox, rear suspension and other components from Ferrari. Stroll told RaceFans it makes sense for Williams to pursue a similar arrangement with Mercedes, whose engines it already uses.

However the fashion magnate, whose wealth is estimated at several billion dollars, dismissed rumours he has offered to fund a Haas-type deal between Mercedes and Williams.

Stroll said he “tried to persuade [the team] to go that route, but I’m not about to buy them anything from Toto [Wolff, Mercedes Motorsport executive director].”

In response to a question from RaceFans in Baku, Wolff said the team now has the “capacity” to follow the Haas model with Williams or fellow engine customer Force India in 2019.

“I think we have seen that the system between Ferrari and Haas has worked for both,” said Wolff. “It’s an interesting revenue filler for Ferrari and I think in terms of synergies there is a lot you can work on.

“So far the system is very successful and of course our thinking goes in that direction, whether it is Williams or Force India to collaborate. But we are in the middle of a tough fight for this 2018 championship, so we need to prioritise.” 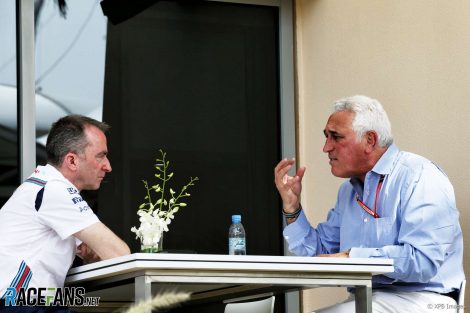 Stroll (right) with Williams designer Paddy LoweRumours Williams might pursue a closer relationship with Mercedes first surfaced last year. But deputy team principal Claire Williams told RaceFans last month the team is “proud” to be a constructor and said she is unwilling to pursue the Haas route.

“The model that Haas have, the model that Force India have to a lesser degree, is not something that we subscribe to at Williams. We certainly haven’t in the past. We feel we are a whole constructor, a holistic constructor. We’re very proud of the fact that we design, build and develop our race cars fully in-house. Very, very little is out-sourced.

“Whether that’s a relevant approach in this day and age under the operating circumstances that we find ourselves in in Formula One at the moment, maybe it’s not. But that’s where we are at the moment, and so that’s what we have to work with.”