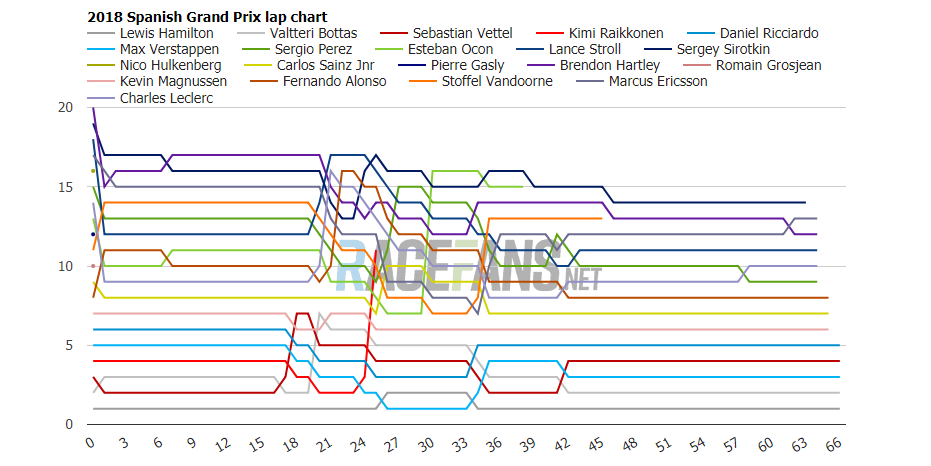 The Spanish Grand Prix showed up the performance difference between the top three and the chasing field, as only five cars finished on the lead lap.

Lewis Hamilton had a 20-second lead by the chequered flag, a luxury which meant he didn’t have to drive flat-out in the closing stages. His quickest lap was therefore almost seven-tenths slower than the fastest lap of the race, set by Daniel Ricciardo. Hamilton had already done the leg work early in the race when he was often half a second faster than his pursuers.

According to Sebastian Vettel the reason he made a second pit stop was because his tyres weren’t going to last to the end of the race. He had made an early first pit stop which seemed to be motivated by a desire to stop Valtteri Bottas jumping ahead of him via the undercut. This meant Vettel was due for a long run to the end if he didn’t pit again.

In the laps before he came in Vettel did lose a little time to Hamilton but his margin over Valtteri Bottas behind was more or less constant. Given how well he made his tyres last in Bahrain, it’s surprising Ferrari surrendered the position so readily. It may well be that they expected he would stay ahead of Max Verstappen by pitting under the Virtual Safety Car, but as he narrowly lost out there, the decision to pit backfired badly.

Significantly, there were few other takers for a two-stop strategy and Vettel’s own team mate said he was planning to pit once as well. Kimi Raikkonen, of course, was yet to pit when his car failed.

For the second race in a row Williams did the quickest pit stop. Unfortunately for them they also had the slowest car.

Explore the Spanish Grand Prix in-depth with these interactive charts:

The positions of each driver on every lap. Click name to highlight, right-click to reset. Toggle drivers using controls below:

The gaps between each driver on every lap compared to the leader’s average lap time. Very large gaps omitted. Scroll to zoom, drag to pan and right-click to reset. Toggle drivers using controls below:

All the lap times by the drivers (in seconds, very slow laps excluded). Scroll to zoom, drag to pan and toggle drivers using the control below:

The tyre strategies for each driver: