The FIA is aiming to address these through the creation of the Disability and Accessibility Commission earlier this year. The commission is headed by Nathalie McGloin, a Porsche club racer who has partial paralysis.

Secretary General for Motor Sport Peter Bayer explained to RaceFans what the sport’s governing body is doing to help more drivers like Monger participate on the same terms as their rivals.

“For us [it’s] critical to have a global database of solutions for drivers with a handicap to make it easier for someone who arrives to understand what is actually existing,” said Bayer.

“And second is the licensing system to make sure we have the right licence for the right guys in the right classes. That’s something we want to address in the commission.”

Bayer wants to avoid the need for special arrangements for every racing driver with a disability. “We’re trying to improve this commission [and] enter an era where things are clear, where we have structures and solutions in place.”

Monger had amputations to both his legs following a crash last year. He returned to racing in the British F3 championship at Oulton Park and scored a podium finish in his first race. 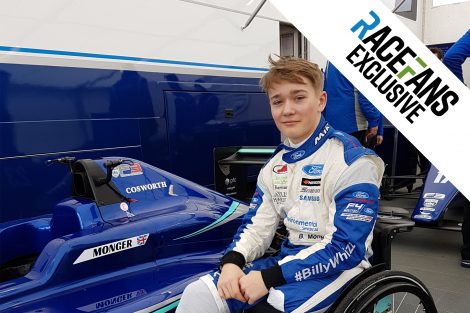 Billy Monger exclusive: “I just want to be a racing driver again”The 18-year-old, who drives his car using a combination of hand controls and a prosthetic leg, must pass the same cockpit extraction test as his rivals. “He exited the cockpit alone without any support in less than five seconds,” said Bayer.

“So there’s no exception, no waiver, no nothing. It’s just business as usual.”

The cockpit extraction test may become more challenging for drivers such as Monger as the Halo becomes a more common sight in junior categories. “It might be easier, it might be harder,” said Monger when asked by RaceFans. “Until I get into a car that has a Halo I won’t know if it’s going to hinder me or help me.”

Bayer confirmed the FIA would not issue a licence to a driver who could not pass the test. However solutions are being considered to help drivers with disabilities exit cars more easily, such as seats which can raise them in the car when needed.

Next week Monger will race against a group of Formula E drivers in the BillyWhizz Charity eKart Race. The event on April 25th is to race money for Spinal Track, a charity founded and run by McGloin which provides driving experiences for people who drive cars using hand controls.