A packed first two days at the Circuit de Catalunya ended on a sour note as several journalists had their cars damaged at the track. @DieterRencken reports from the paddock.

My alarm jolts me: Time to hit the road for the first European grand prix of 2018. Seems strange to know proceedings begin in a few hours – all other grand prix so far this year have been flyaways; hence I’ve left home the day before. The pay-off for an early start is a short-haul flight.

The roads are empty as it’s Ascension Day. My Brussels Airlines flight is on time at both ends, but I’m hit with a sense of foreboding as the airline’s pilots have given notice of a pending strike and so I may be delayed after the race.

I stroll into the paddock reflecting when I was last here: the final day of pre-season testing, and my first set of gigs for RaceFans. It seems like yesterday, but equally, feels like an aeon ago given the real progress RaceFans.net has made in a few months. Thank you readers for all your support. 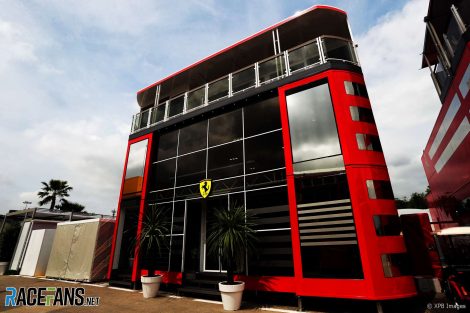 Ferrari’s home away from homeAs the first grand prix of the “roadie” season, for many years Barcelona marked the launch of swish new “motorhomes”, as the teams’ palatial hospitality units are still referred to by F1 lifers. 10 about ten years until the end of the manufacturer era in 2009, the first European grand prix invariably saw the units grow in length, breadth and height until McLaren launched its state-of-art Brand Centre in 2007.

Not even Red Bull’s jivey Energy Station – housing both teams owned by the drinks company – beats the triple-storey black/silver mirror-glass fronted curved mansion for style and class. Then, as the global economic crisis hit, so did reality: and since then nary a new facility has been commissioned save for the Haas unit, which is designed very much along tradition lines. Fitting for the budget cap era…

I sit down with Guenther Steiner and marvel again at the ease with which the Italo-American, who had but two years of F1 experience in technical capacities before upping sticks for a life in NASCAR and allied environments, slipped into the F1 team principal role. Our exclusive interview with him will be published next week

An FIA media conference with FIA F1 Delegate and Race Director Charlie Whiting and Nikolas Tombazis, the FIA’s recently appointed Head of Single Seater Technical and the man who drove the changes to F1’s 2019 aerodynamic regulation changes. It’s heartening to hear that more research has gone into the changes than for any other regulations changes since 2009.

I visit the Circuit de Catalunya’s newly-opened “Media Lounge”, for lunch: fresh sandwiches filled with local meats, plus salad and fruit yogurt. Not too long ago most media centres served either zero sustenance or soggy sandwiches – sometimes at a fee – so this initiative is much appreciated. Seems the message has gotten through to race promoters: journalists are actually human, and have human needs… 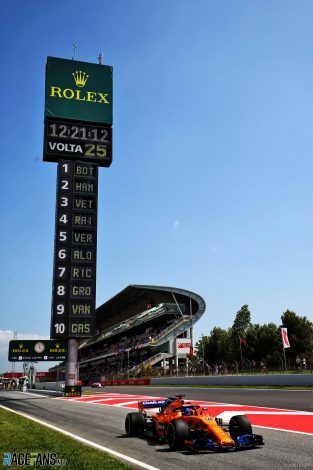 Will Spain keep its F1?I meet with Vincenç Aguilera, president of the Circuit de Catalunya to discuss the future of the race after its contract expires next year. His comments will be published shortly, so I won’t pre-empt matters, but suffice to say there is an obstacle looming.

Leave for El Truc, a local restaurant that invariably hosts a number of F1 dinners during grand prix weekend. This time I’ve been invited by the German Grand Prix promoters, who wish to share with us their desire to retain the Hockenheim race after the current (biennial) contract expires in July – but not at any risk to the company, in turn owned by the local town council. A proper discussion is scheduled for Friday.

I check in at the Ibis Mataro, around 20 kms from the circuit – about the most cost-effective accommodation available at grand prix weekend. Lesser hotels situated within close proximity of the circuit that usually charge around 50 quid per night generally double, triple or even quadruple their prices during the race. Rip-off!

Friday is Williams British Breakfast Day – for the Brit Pack, of which I am an honorary member by virtue of my years contributing to British outlets. Nothing like a good fry-up to start the day, yet it seems strange to start brekkie without the sound of cars: The slot previously coincided with the start of FP1, which we watched in the hospitality unit while enjoying Williams’ hospitality, but this year’s shifted schedules means the session now starts at 1100am, ending 90 minutes later.

Lunch at Red Bull’s Energy Station while catching up with Bryn Williams, publisher of Autocourse – the indispensible motor racing annual I have contributed to for the past five years – before having a natter with Jo Ramírez and his lovely lady Uschi, whom he met in Austria while competing on the Silveretta Classic Rally.

Jo needs no introduction, of course: over the years he worked with some of the sport’s greats such as Ayrton Senna, Alain Prost and the Rodriguez brothers, with whom he ventured across to Europe from his native Mexico as mechanic. Always good to catch up with this legend of F1.

After that there is a session with Hockenheim management, during which they reveal they proposed a revenue share deal to Liberty Media, or even a ‘white circuit’ rental agreement, whereby F1’s owner takes over the venue for the grand prix and promotes the event for its own account. After all, goes the logic, if F1 is as profitable as Liberty believes, why would they not jump at the chance?

The Hockenheim roundtable discussion means I miss the FIA Friday press conference, so catch up on the details by reading the transcript later.

As I wander back to media centre I spot Stuart Pringle, managing director of Silverstone Circuits, and the man tasked with ensuring that future British Grands Prix do not break the bank. Spot the common thread with Hockenheim? The bottom line of our chat is that no progress has been made (yet) between Liberty Media and the owners of the only British circuit currently licenced to hold a F1 grand prix…

When we enter Renault’s hospitality unit for an interview session with technical boss Bob Bell, the German is spotted chatting to Amber Lounge folk, so now we know where Renault’s priorities lie…

I arrive at car park to note a number of agitated folk on telephones. Various cars in the (allegedly guiarded) F1 personnel and media car park have had their windows smashed and been broken into. I alert the FIA, the reaction is swift, but sadly this is not the first time at this venue and a shocking indictment of the lackadaisical attitude of the promoters Monza suffers similar issues and Brazil’s security record is even worse.

My tweets (@RacingLines) are met by tales of similar woe from the recent Jerez Moto GP round, and clearly points to a larger problem. Fortunately my modest Opel Corsa is left unscathed, while Audis and other luxury brands have been hit. There might be a lesson there…

I head for dinner at a local seafood restaurant and am sated by Dorado ala Sal, fish baked in a crust of salt. De-licious! Hit bed at midnight after writing this.