Which team will make the biggest step forward with their Spanish Grand Prix upgrades? Here are five of the big talking points for this weekend’s race.

The teams are back at the Circuit de Catalunya two months after they began testing their cars. Several of them have found serious problems they need to correct and almost all of them will take the opportunity to introduce substantial aerodynamic upgrades at the first race close to their bases. For some it wouldn’t be a great exaggeration to suggest their season may hinge on how well this weekend goes.

Force India believe they can make big gains with their VJM11 by correcting a fundamental problem with its design. McLaren is another team with a lot riding on its new upgrade package for this race.

Williams has been talking about its “major” planned FW41 upgrade since Melbourne. How badly they need it can be judged by the fact they were slower at the last three races than they were in 2017.

The teams at the sharp end of the field tend to keep their cards close to their chest about what they might be bringing. Last year Mercedes made a significant step at this race. And as the Circuit de Catalunya lacks long straights of the kind Ferrari has thrived on so far this year, it could be a better weekend for the reigning champions.

Achieving reliability was the key objective for Renault’s power unit programme after a string of breakdowns in 2017. They’ve clearly made some gains in this area, though the fact several Renault users are already on their second power unit elements shows all is not quite right yet.

Nonetheless they are pressing ahead with a power upgrade which should arrive this weekend. Whether it will be raced remains to be seen, but with Red Bull in the mix for race victories and Renault and McLaren near to the front of the midfield, it has the potential to be a step which has a significant bearing on the competition.

A different kind of race? 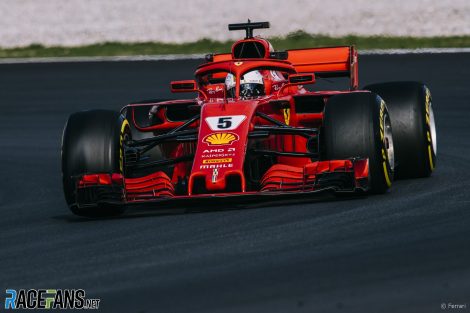 The new asphalt will produce much quicker lap timesWe could see a rather different Spanish Grand Prix to what we’ve been used to in the past, for several reasons. The pre-season resurfacing which the teams experienced in testing has altered the character of the track. It’s now faster and smoother, and the asphalt is darker, which means it retains more heat.

This all adds up to a lot more strain on the tyres. Despite this, wear rates are not too high, which explains why Pirelli has chosen to reduce the tread on its tyres for this race. This should help teams keep their rear tyre temperatures under control. However it is another variable thrown into the mix at a time when none of the teams seem to have fully mastered the 2018 rubber yet.

On top of that this weekend’s tyre range is considerably softer than what was used last year. For the first time in 2018 teams had the benefit of having run their 2018 cars in testing before selecting their tyres for the race. The result has been an unusually broad range of different choices.

The Circuit de Catalunya has an unenviable reputation for processional races, part of which is blamed on how well the teams know the track because of how often they run there. But this year there are more unknowns than usual. 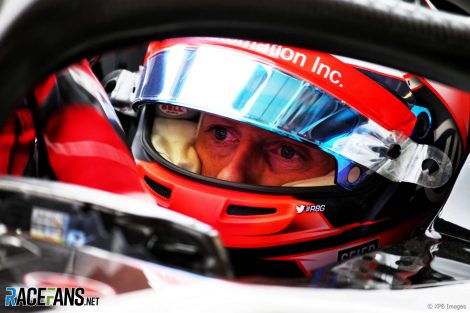 Grosjean: Nul pointsIt’s one thing for rookie Sergey Sirotkin to arrive at his fifth race weekend still point-less: After all, he is driving the second-slowest car in F1 at the moment and his team mate only scored his first point last time out.

But Romain Grosjean has vastly more experience and a much more competitive car. He’s started in the top 10 twice but hasn’t finished there yet.

The last race was surely the nadir, as he went off in qualifying and crashed under the Safety Car in the race. He needs a fresh start as the ‘European season’ begins.

Sirotkin goes into the weekend with a three-place grid penalty after Williams’ attempt to have it reviewed was rejected on multiple counts.

The FIA’s dismissal of their attempted appeal – which involved eight drivers involved in five separate incidents – could hardly have been more emphatic. It was rejected on 10 counts and centred on the point that they had presented no new information which merited any of the cases being reopened.

The team can expect to face probing questions about what motivated this course of action and what they expected to gain from it.

RaceFans’ readers verdicts on the season to date.

Driver of the Weekend

Who do you think will be the team to beat in the Spanish Grand Prix? Have your say below.